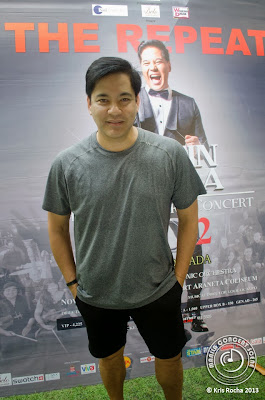 The Concert King, Martin Nievera proved to one and all that 30 years of musical excellence in an industry that usually thrives on change and superficiality, is a feat that only artists of extraordinary calibre and unbridled passion are able to achieve.  Martin Nievera is, hands down, one such artist.

He is extremely talented and in the 30 years that he has carved his name in the pillars of the local music industry, this gift has never wavered.  He is loved back by his throngs of loyal fans and followers because he, first, showed them an utmost love and devotion to his craft rarely seen in an artist from whatever generation.

At his 30th anniversary billed “3D (Tatlong Dekada)” held last September 13 at the Smart Araneta Coliseum, Martin showed his audience why his artistry endures.  The music – well-loved romantic ditties, chart-topping songs – is a given.  So is the Nievera trademark of intelligent, decent and always humorous ways he entertains his audience.  And perhaps the magic that weaves all these together in one neat package is the fact that everyone knows that by just listening to and watching him, they are one with MArtin Nievera, the man and the artist, in this very personal journey.

And this is what we can expect when our undisputed Concert King essays a repeat of the successful “3D (Tatlong Dekada)” concert happening on November 22, 7:30PM in the same venue – the Smart Araneta Coliseum.  The same brilliant production team is behind Martin in this repeat – musical director Louie Ocampo, the formidable ABS-CBN Philharmonic Orchestra at the helm, stage director Rowell Santiago and the lovely phalanx of special guests which made the night doubly special for everyone.  There will be an even bigger surprise at the night of the repeat as more world-class names are added to the special guests’ list.

Produced this time by Nolstead, Inc., “3D (Tatlong Dekada)” caps Martin’s 30 glowing years in the business.  It was in 19982 when Martin was  first heard in the Philippines, trying his luck as a singer as the son of timeless balladeer Bert Nievera.

As fate would have it, Martin did not just equal his famous father’s popularity.  He even surpassed it.  His combination of mellow but powerful tones and energetic performing style gave him his own identity.  He also easily proved himself a born hitmaker early in his career.  He firmly established himself as a major talent in the local music industry with songs like Be My Lady, Each Day With You, Holiday, Please Don’t Throw My Love Away, Ikaw Ang Lahat Sa Akin and Say That You Love Me.

The ensuring years found him on television “Penthouse Live!” and “Martin After Dark,” where his natural gift for gab made him ideal talk show host.  And he made more hits, Kahit Isang Saglit, You Are My Song, Ikaw Lang Ang Mamahalin, Forever, Ikaw Lang Aking Pangarap, Kung Nasaan Ka Man and others.

But it is in this live concerts where his talents and successes blend together to present Martin Nievera whom fans love the most.  That is why he came to be known as the Concert King and has staged many memorable, sold-out shows.  “3D (Tatlong Dekada)” is now being numbered among those.

Tickets to “3D (Tatlong Dekada)” are now available at Ticketnet. Visit www.ticketnet.com.ph or call 911-5555 for inquiries.

You are the light of the world. A town built on a hill cannot be hidden.
Matthew 5:14
DailyVerses.net