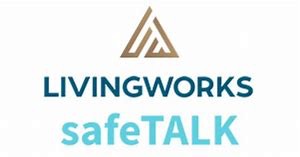 As a pre-conference offering of the EPCALM Adult Leukemia Foundation’s Understanding Grief 6: Beyond Mental Health, EPCALM Is pleased to offer the safeTALK program.
safeTALK is a program that is part of Living Works Education who has been an international leader providing suicide intervention training for more than 30 years.  Living Works Education is based in Canada (www.livingworks.net).
safeTALK – Suicide Alertness for Everybody
Whether directly or indirectly, most people with thoughts of suicide invite help to stay safe.  safeTALK is a four-hour training that prepares participants to recognize these invitations and connect a person with thoughts of suicide to intervention resources.  Powerful videos illustrate the importance of suicide alertness, while discussion and practice stimulate learning.
The ‘safe” of safeTALK stands for ‘suicide alertness for everyone.’  It proclaims our belief that virtually everyone (age 15 and over) can learn and use what safeTALK teaches.  The letters of ‘talk’ stand for the steps that one does to help a person with thoughts of suicide: Tell, Ask, Listen and KeepSafe.  These steps are highly integrated and sequential set of activities.
safeTALK assumes that persons with thoughts of suicide are uncertain about suicide.  While part of them may want to escape the pain of living, another part wants to live, or at least, wants to avoid dying.  Tell and Ask initiate the alertness process.  They bring the thoughts of suicide out into the open and signal to the person with thoughts that the alert helper is aware of the uncertainty and wants to help.  Listening activates or strengthens the part of the person that wants to avoid death.  KeepSafe supports the part that wants help by taking leadership in making a connection with someone who can complete a suicide intervention.  We believe these TALK activities are both a minimum and maximum set.  Minimum in the sense that if the steps were made less sophisticated, the set would no longer be helpful for a person with thoughts of suicide.  Maximum in the sense that if the steps were more sophisticated, the set could not be learned in less than a half-day by groups using a single trainer.
Who should attend?
Anyone 15 years of age or older who wants to help people be safer from suicide.
Learning Objectives
safeTALK participants will be better able to:
The Role of safeTALK in a Suicide-Safer Community
safeTALK helps connect people with thoughts of suicide to caregivers who can support them.