The Llavac and Pangil Christian Fellowships (LCF & PCF) received a timely Christmas gift from the EPCALM team of volunteers on December 23, 2010 at the Subaybay farm in Barangay Llavac, Real, Quezon Province. The gift was by way of a Medical Mission for the church workers, who volunteered to support EPCALM as part of the NATIONAL PRAYER MOVEMENT for EPCALM.

After a long three hour drive by car, the EPCALM team reached the venue of the EPCALM Medical Mission Health Awareness Campaign 2010. 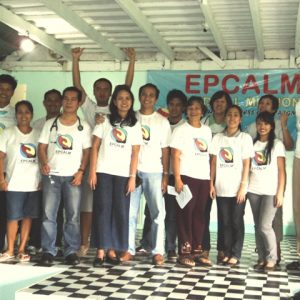 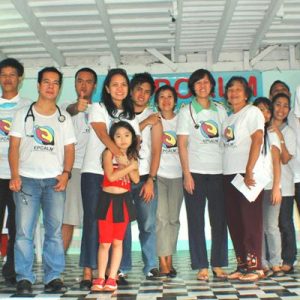 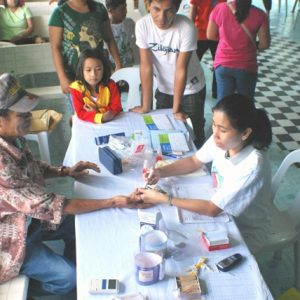 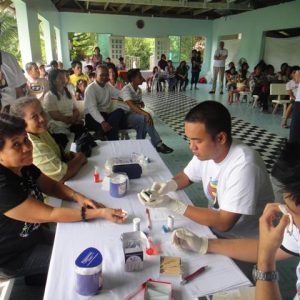 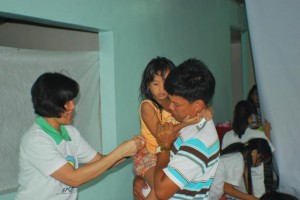 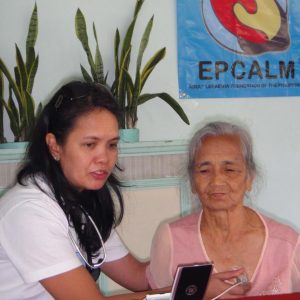 The group was warmly welcomed by constituents of Pastor Greg Subaybay, founding president of the International Urban and Rural Community Development Training Center located at the Subaybay Farm, who is also the founder and senior pastor of the LCF and PCF.

The LCF and PCF members and children waited patiently as the EPCALM team set up their equipment for the whole day event. Dr. Erlyn P. Cabanag-Demerre, founder and chairman of the Board of EPCALM,with husband Engr. Justice Demerre, EPCALM president and CEO, along with their children Gabbie, Kurt and Kyle, led the EPCALM team that was composed of: Pediatrician and coordinator of Doctor’s In Touch (DIT) Dr. Vicky Ang;Laguna based cardiologist Dr. Paul Mondelo; and two volunteer medical technologists – Gianpaolo Lepiten Cabanag and Gordon Christopher Cabanag Tubo. The team’s support staff at hand were: EPCALM trustee Evelyn P. Cabanag-Tubo; US based scientist and EPCALM advocate Tim Moore; medical secretaries Anna Orani with husband Julius, son AJ; and Elisa Martinez.

In the conceptualization of the medical mission, Dr. Vicky Ang suggested that the community medical missions should cater to preventive care in the form of immunizations.

Dr. Ang pointed out that usually, Christian workers are the ones neglected because they are the ones expected to serve. So for this 2010 EPCALM medical mission, Dr. Ang suggested that the health needs of the church workers be addressed first. “..Christian workers should be protected before they go out to serve the community..” Dra. Ang remarked. The activity started with a prayer by Pastor Norma Manuel and words of welcome by Dr. Erlyn Demerre.

According to Dr. Demerre, the medical mission would veer away from the usual free clinic set-up to one geared towards education, to promote health awareness and prevent disease. Dr. Ang gave a brief discussion on the merits of preventive care in children and mothers and the benefits of proper breastfeeding and timely immunization. The pediatric patients queued up for routine check up and immunizations for measles, mumps and rubella (MMR) by Dr. Vicky Ang, assisted by volunteer nurse from the community, Ms. Renilyn Gay Aquino.

Eligible adults aged 60 and above were given pneumonia shots, while women in their reproductive age were given MMR. Many received flu shots as well.

The flow of adult patients started with blood works for cholesterol screening and blood typing. Then ECG and echo screening using the latest innovation of GE, the handheld echo Vscan, were done as was appropriate for age or condition. Drs. Demerre and Mondelo tackled all the adults needing care and dispensed of medicines as needed.

Gabbie Demerre, eldest child of Dr. Demerre was the youngest EPCALM volunteer at the site, helping out with the forms and handing out of medications under supervision by other volunteers.

More than a hundred LCF and PCF members and their children were served that day.

The EPCALM 2010 Health Awareness Campaign at the Subaybay farm though, is the first of its kind in catering primarily to the Christian workers and their families. The message is clear, that in order to serve, we have to first take care of our bodies which is the temple of God. The Spiritual arm of EPCALM’s three armed service (spiritual, medical and financial arms) has organized the Prayer Movement for EPCALM that is created to link various churches to be united in prayer and service for patients with leukemia and their families. (See Areas of Service on EPCALM home page – Spirtual, Medical, and Financial). Hence, Outreach director Pastor Norma Manuel organized the LLavac and Pangil Christian Fellowships to become involved in the Spiritual arm of EPCALM.

Willingly, the memberships of the LCF and PCF absorbed EPCALM’s Mission and Vision and pledged to support through intercessory prayers and other volunteer work; formalizing their involvement on November 19, 2010 during the Training & Seminar on Agro-Tourism Program sponsored by the Province of Laguna under the leadership of Laguna Governor Jeorge “ER” Estregan.