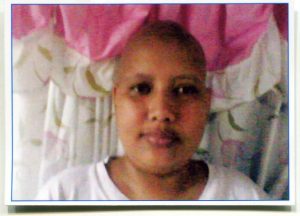 Last January 2011, Arlene Danugo Bisamos, married to Erwin Bisamos (33), residing in Blk 28 LRT, Barangay Gregoria de Jesus, GMA, Cavite, was admitted to the Philippine General Hospital (PGH), to give birth to her fourth child.  Arlene, a 29 year old mother of 3 girls ages 14 (Erleen), 12 (Cassandra Lee) and 3 (Sophia Ezra),  was undergoing regular laboratory examinations,  due to frequent hematuria during pregnancy.  Upon evaluation of the test results though, Arlene was diagnosed with Acute Promyelocytic Leukemia, a subtype of Acute Myelogenous Leukemia (AML).  Arlene was then recommended to undergo IV Chemotheraphy, after she gave birth to her fourth girl (Frenchesca).

Arlene, who recently celebrated her 30th birthday last March 16,  is the fourth in a brood of seven (7) children.  She used to help her mother in fish vending, as it was their source of livelihood before her father died.  In the course of helping her mother while studying at the same time, Arlene (then 14), met Erwin (then 18), who was also studying.  A relationship developed, which resulted into an early pregnancy and subsequent dropping out of school.

Arlene has been a full time housewife since then. The couple lived with Arlene’s parents in Muntinlupa for a while, until they transferred to Cavite to live with Erwin’s mother, a few years ago.  Arlene’s husband, Erwin, is a product of a broken family.  His parents separated when he was nine (9) years old and he was sent to his grandfather in Muntinlupa.  His grandfather sent Erwin to school, but due to Erwin’s early marriage to Arlene, he was forced to look for a living to support his young family.  Erwin lost contact with his father.  When his mother remarried, Erwin, Arlene and their children transferred and lived with her in Cavite.  Erwin’s mother, who has a “paupahan” (rental places), is the one supporting Erwin and his family, including Arlene’s treatment.

After Arlene’s original pregnancy admission last January 11, 2011,  she was referred to the PGH Cancer Institue last February 23, 2011 for chemotheraphy.  The family was financially and emotionally unprepared to face the new disease.  Being a new mother, Arlene has not performed her role of being a mother to her newborn, as she had to immediately undergo medical procedures  and treatment for her Leukemia.  Her in-laws in the meantime have assumed the child-caring responsibilities for her, with the hope that Arlene will eventually recover soon.

Erwin in the meantime is earning very limited income, which is not enough to cover their daily expenses.  With Arlene’s need for treatment, the family has incurred debts already, more so since Erwin has not been earning for over a month now.  Further tests like the Flow Cytometry, financially burden the family, but they are willing to go through it with the help of their relatives.

EPCALM is posting his story to implore on the generosity of the readers to support Arlene in prayer and resources.

Or you can also donate using paypal, by clicking on the button.